Zero Pollutions Conference - hearing from industry experts across the globe 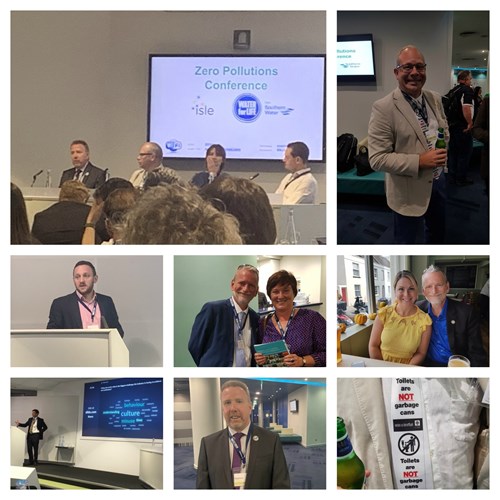 Engineers, regulators, strategists and experts on wastewater gathered in the Inmarsat building on the edge of the City of London this week.

The event was Southern Water's Zero Pollution conference. Starting with a key note speech by the Environment Agency's deputy director Helen Wakeham, the agenda was clear - how can utilities and their customers bring us to a world where household and business wastewater never pollutes the environment?

Delegates had come from as far afield as London - London, Ontario Canada that is - across Europe and many UK utilities to share experiences and best practice, network and learn from each other.

Although he was the organiser, Southern Water's Dr Nick Mills was focused in driving challenging conversations.
Wastewater pollution comes from multiple sources - the legacy of pre-1960s combined drains and sewers, failure of utility equipment and customer behaviour.

Snapshots from the day

Ontario's own Captain Fog Barry Orr, who has a semi-regular newspaper cartoon strip focusing on his battle against careless disposal of fat uses the tools of consumer persuasion, especially on taking school students into the field to see the results of sewer spills caused by fat, oil and grease or flushing plastic based wet wipes away.

Thanks to his work, the city has been blockage free for five years.

We also met Andy Shively and Jennifer Rusch from Kansa City, who have the largest smart and sustainable sewer network in the USA, which they have achieved by massive investment in smart technology and people.

From Amsterdam, the conference heard the inspiring story of Bas de Niljs, senior engineer at Waternet The city of canals is now able to stage an annual day where residents can swim in the canals. Huge spending has cut many of the historic combined drains and sewers. All houseboats and every other property must be correctly connected to the sewer network. And Amsterdam's eco-aware population has leapt aboard to harvest rain water around their homes and gardens to reduce pressure on the system. That said Amsterdam City Swim requires a lot of preparation and year round swimming is not yet advised.

Steve Williams, Southern Water's network protection officer, explained how we work with food businesses to help them understand the impact of incorrect disposal of cooking fat and grease. In contrast t some wastewater companies approach, Steve is prepared to act as the stick to drive change. Fast food joints which block sewers, cause pollution and damage the environment and ignore Steve's friendly advice on waste management can and do face prosecution.

By contrast, Elivra Gabos who leads Steve's team, focuses on households. And a softer touch is needed. Since 2015, Elvira has been conducting thousands of home visits to warn of the consequences of flushing plastic-based wet wipes. Her work has significantly changed behaviour- when the Unflushables project started there were 23,000 sewage blocks a year. Today, despite a fast increasing population the number is down to 17,000.

Nick Mills shared the stage with James Ogden. Here the focus was on wastewater treatment plants and pumping stations. Mills has spent the past year drilling into the data around asset failure.

"It is not so surprising that pump failure is a major contributor to incidents at pumping stations. But that doesn't tell you anything - we need to drill down to root causes. Nor are electrical failures are a surprise factor. But what preceded these events?"

The overall message clear -zero pollution may be a giant aspiration but one that customers, regulators and service provides are all committed to achieving. There is no single solution to a problem that involves not just a number of systems but a system of systems.