Each for Equal this International Women's Day

Happy International Women’s Day! This year’s theme is #EachForEqual and an opportunity to celebrate women’s achievements, raise awareness against bias and take action for equality.

We spoke to colleagues - both men and women - about their experiences and successes during their careers and whether they think there’s still any challenges for women on the career ladder.

Here’s our Fat, Oil, Grease and Unflushables manager, Elvira Gabos telling us about her experiences as a women in the water industry, who inspires her the most and whether she thinks the industry is becoming more gender-equal. 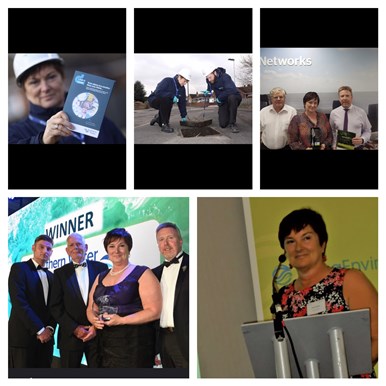 What do you love most about your job?

I love that my role is a mixture of different things. From operational to communicative, it’s complex and varies all the time. We can be creative, engaging and informative, plus my team are just wonderful.

What if any are the challenges facing women in the industry today, do you think?

I recently went to a Wastewater Wholesale Managers meeting. There were about 100 people in the room and because of this interview I counted the number of women. There were 10 women there, which means we have space to improve. I haven’t faced any problems in the company as a woman but I have met people in the field who face some challenges. So I think there is still a culture that maybe women are not easily accepted in those roles.

Do you think the industry’s becoming more gender equal in your line of work?

I think that because of the general policy and perception of the twenty-first century the industry is trying, but we are far from having reached that goal.

Why do you think that is?

I think it starts at school. Women are totally capable of studying science subjects and there is a general perception that those subjects are more difficult which is not true, and probably their parents nor teachers don’t emphasise or try to give enough information to girls. I believe this is shifting, but while more is being done to encourage girls from an earlier age to go into this line of work, there’s still more to do - it’s not strong enough yet.

Are there any women that have inspired you in your career?

Maybe my Mum. She was/is a chemical engineer. She had her masters when she was young but then she did her PhD when my sister and I were teenagers and I was really proud of her. She is an inspiration for me.

What would you like to see in the next ten years for women in the industry?

I would definitely like to see more women in the industry. In my opinion the water sector is quite good - people will always need drinking water, and wastewater will always need to be taken away. So there will be a lot of jobs in this industry all the time. Whether or not more women will be inspired to pursue these careers, I don’t know. But within the industry you do need an awful lot of different professions. So it’s very versatile as well, for women to be part of it.

What advice would you give to women thinking about joining your line of work?

You have to be brave and just go for it. Sometimes men have more self-confidence and they just go for the jobs and get it, but we women are capable of doing that.

He tells us what he enjoys most about his role and thoughts on gender equality in industry...

We also caught up with Process Scientist, Izzie this International Women's Day.

“I work with a lot of women. The gender equality is quite strong there; if anything, we outnumber the men.”

Here’s more on women who inspire her, and what she’d like to see change for women in the next ten years.