Pride Month: supporting communities on the Isle of Wight

When StoneCrabs applied for funding under our Community Grants scheme last year, the charity had plans to tackle loneliness in the LGBTQ+ community on the Isle of Wight.

A community project to help LGBT+ people with loneliness 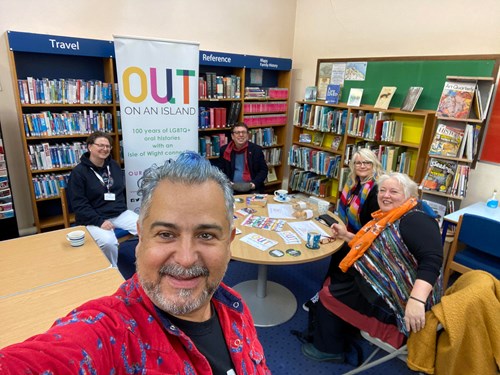 StoneCrabs had developed an eight-month project to help connect LGBTQ+ people who may be feeling isolated or lonely on the Isle of Wight. The project Out On An Island - Together As One planned to organise Pop Up Cafes in accessible venues across the Island, providing a safe space for the LGBTQ+ elderly community to meet up and be themselves.  Talks and events in libraries and care homes across the island were also part of the plan, to encourage better understanding and acceptance of the LGBTQ+ community.

Recognising the sense of isolation that some LGBTQ+ people feel, particularly those who may be less confident, the charity will also be setting up a Buddy Support Group. The group will make one-to-one sessions available for volunteers and participants, giving them a chance to talk. It’s an opportunity to connect older and younger LGBTQ+ individuals and to provide friendship as well as support where needed. There’s also a Story Sharing programme, to record participants’ stories which can then be shared with a wider audience through channels such as Anchor FM and Spotify.

StoneCrabs runs inclusive community projects with a focus on cultural diversity. The Out On An Island - Together As One project is part of a wider project that began in 2019. The project includes collecting and telling previously untold LGBTQ+ stories from across the island.

Project Manager Caroline Diamond said: “We are grateful to Southern Water for providing funding to StoneCrabs, enabling us to provide dedicated support and connections for the Isle Of Wight’s LGBTQ+ community. We are keen to introduce an awareness of LGBTQ+ struggles and the challenges faced to more organisations, making them more inclusive.”

“The funding will help us to grow our team, to advertise our activities, to hire venues but most of all to support LGBTQ+ people, their families and allies of all ages and set up a new Buddy scheme.

"We are also very proud to announce that our senior volunteer, Peter Woodnutt was awarded Freedom of Ryde in recognition of the support he has given to the LGBTQ+ community at a Jubilee Celebration."

The charity has also been working closely with IW Pride ahead of their annual event on July 16, and there are exciting opportunities for more pop ups, socialise and raise awareness of the LGBTQ+ community on the Isle of Wight.