How to save water in your home

Discover how small changes to your daily routine can help you save water in your home – and save money on your bills.

We rely on water every day. But our population is growing fast, and climate change is bringing greater risk of floods and drought. This puts pressure on our water supply. This means we have less water to go round. We can all use less by making small changes to our daily routines, helping us achieve our target of using just 100 litres per person, each day.

Ways to save water in the home

Try these small changes to your everyday routine and save water in your home:

We offer our customers free home visits to provide water-saving advice, look for leaks and fit water-efficient devices. If you want to discover more ways to save water in your home, book a water-saving home visit.

We aim to meet as many of our customers as possible and regularly attend community events.

Find out about our upcoming community events where you can receive free advice and giveaways to help you use water wisely and save money on your bills.

We've teamed up with DIY retailers, builders' merchants and manufacturers of bathroom fittings to introduce the European Water Label scheme.

The scheme has been launched to help customers find water efficient bathroom fittings such as taps, showers, toilets and baths.

The European Water Label was developed by the Bathroom Manufacturers Association and is operated by The Water Label company. 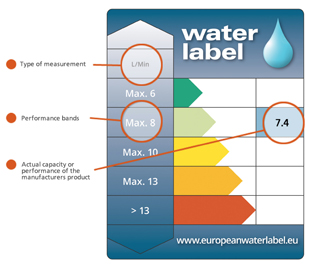 The Label, which began appearing on bathroom products in summer 2014, includes information such as:

Comparison of water use

It also provides customers with an online database comparing the amount of water being used between similar products and enabling them to compare on a like for like basis.

Search the online database for products

When searching, look for products which score within the green band of the label, as these are the more water efficient products.

Save on your bill

Choosing more water efficient products will help you to save money on your water and energy bill. Nearly a quarter of your energy bill is spent on hot water.

The Label follows a similar approach to the Energy Efficiency Label found on white goods such as fridges and freezers.

Target 100 is a commitment to our customers – we'll support them to reduce personal water use to an average of 100 litres each per day.